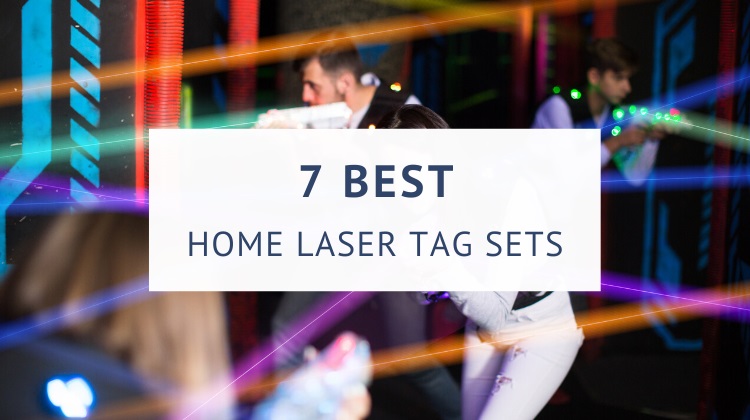 We have all played army, cowboy, or any other shooting game while growing up as kids. Back then we might have used sticks or, if we were lucky, plastic guns with the occasional sound effects thrown in.

But now there is a game changer: home laser tag guns. Having gone through an enormous popularity boost in the last decade, laser tag is now an established action game that is suitable for both kids as well as for adults.

Home laser tag sets allow for fun and intense shooting games with your friends or with your kids, at home or in the park. We have researched the market and compiled a list of the best laser tag guns and sets available today.

Below are 7 of the best laser tag guns and sets for home use currently available. Single laser tag guns, 2-packs, or 4 player laser tag sets, we have them all covered.

Some of these laser tag sets also come with target vests, while other guns have integrated sensors built in.

This 4 player laser tag set (previously known as “Call of Life”) by The Adventure Guys with ultra cool laser tag guns has 4 different team settings, meaning you can play individually against each other or form different teams.

It also allows you to choose different blaster settings, which means you can have 4 different types of guns: a pistol, a shotgun, a submachine gun or a missile launcher.

Each of these blasters have different ammunition levels and different firing-rates, which makes a laser tag battle much more strategic. Typically, the more destructive your blaster style, the more damage you can do to your opponent, but the less ammunition you have.

Depending on where you are (at home or outside) and which blaster setting you have chosen, the max range is about 40 meters, which is actually really good. The blasters are also the actual targets so there is no need to wear an extra vest.

What’s great is that this deluxe laser tag set also includes a little target bug. It’s quite literally a robot bug that runs around which you need to shoot. This is super fun and useful when you want to practice laser tag at home by yourself.

This Nerf 2 player laser tag set is a great and affordable way to get started in the exciting world of home laser tag. This is a complete set that includes two high-quality Phoenix LTX taggers that register hits with illumination, vibrations and sounds. You can choose between the indoor or outdoor setting which determines for example how far your firing range is.

Other exciting features include the strength switch and shield activation.

Check out my review of the Nerf Lazer Tag Phoenix LTX taggers to get a better idea of how awesome these laser tag guns really are.

Released in 2018, the Laser Ops Pro series of laser tag blasters is the latest attempt to breathe life into the concept of smartphone laser tag. This home laser tag set is actually the successor to the Nerf Lazer Tag Phoenix LTX at number two, which is still going very strong.

The Nerf Laser Ops Pro series currently has two types of blasters available: the AlphaPoint, a smaller pistol-style blaster, and the DeltaBurst, a sniper rifle type blaster. They can be purchased seperately but obviously they can work together in a home laser tag battle.

The blasters also have indicator for ammo and your health status. The sound effects are also pretty awesome, with different actions having different sounds.

Playing a laser tag battle is as easy as it gets. Simply press the power button to activate the blaster. Then select the team you want to be in: purple, red or green. Choosing red or green means you can only shoot players with the other color. The purple color essentially means free for all, shoot anyone you like, no teams.

If you do want to use the Nerf Laser Ops Pro with smartphones, simply download the app for free on the App Store and on Google Play.

You can either attach your smartphone to your arm or wrist via an armband, or attach it to the front of the blaster with a phone mount. The app allows for single-player and multi-player battles, and in multi-player mode you can differentiate between single-device and all-device. The app works really well and is not too complicated.

Overall, the Nerf Laser Ops Pro is a great, new home laser tag set that really raises the bar for others to aspire to. Check out this Laser Ops Pro review for more details.

This popular ArmoGear laser tag set is the first one in this list that comes with vests. Using vests to play laser tag isn’t for everyone, but for some this adds to the experience.

The features of the blasters are very similar to what the laser tag guns at our number one spot have to offer. They have the same awesome team and blaster settings, and also have very similar looks.

The ArmoGear set does offer some interesting extra features, such as voice-guided directions, invisibility mode and night vision flashlight.

It’s worth pointing out with this set is that the laser tag guns themselves are also targets, which means that you can aim at your enemy’s vests but also at their blasters.

This Squad Hero 4-player laser tag set also comes with vests, but what makes this set stand out from the rest in this list is that the blasters are actually rechargeable.

That’s right, you don’t need to buy and install batteries with this set. And according to the manufacturer, you can play about eight rounds of laser tag per charge, which is just about enough.

A great feature with this set is that lives and team data are automatically synced, with LCDs on the guns and vests live displaying your status. This is definitely a useful features during battles.

If you’re looking for a robust and feature-rich home laser tag set with vests, this Squad Hero set is not going to disappoint.

Released in 2016, the Laser X Laser Gaming System is the latest laser tag set that has entered the market of home laser tag guns. Laser X has proved that it can compete with other popular laser tag guns such as the Call of Life set and the Nerf Phoenix LTX taggers.

This set comes with two laser tag guns and two target vests that are connected to the guns with a cable. This may be an issue for some, but the vests aren’t heavy at all and they fit very nicely.

As you can see in the picture, the guns are shaped somewhat differently. This is fine though as it makes them stand out from the crowd.

Laser X has put a strong emphasis on sound and light effects, which is great, but for some people the sound effects can just be a bit too much. There’s even a voice that gives you feedback about how you’re playing and what you should do next. The light effects are awesome though, and the best way to play a laser tag game with Laser X is inside with the lights off. It’s really cool!

As with most of the other laser tag guns listed here, Laser X allows you to play in teams and individually. If you buy multiple sets, all the guns will be able to work together.

The much hyped Recoil laser tag system was introduced in 2017 by Skyrocket as the next generation home laser tag guns. Recoil goes all out with technology and features trying to set a new standard in the world of laser tag.

The Recoil set is an Augmented Reality laser tag set, meaning it mixes virtual reality elements and real-life world into one super exciting laser tag battle. Recoil allows up to 16 players to join in, all connected by the central WiFi game hub that functions as a GPS enabled router.

The hub has a reach of 250 feet which means all players will need to stay within a certain radius in order to keep battling. Your Android or iOS smartphone can be docked into the blaster and gives you real-life feedback about the battle via the Recoil app that you need to download for free.

Recoil is an awesome next-generation laser tag set that you can play with 2 to 16 people in an outdoor setting. It’s best to go to a park rather than on the streets for safety reasons.

What Is Home Laser Tag?

Laser tag is a fun action game or recreational activity – some even call it a sport – for teams or individuals where players basically try and score points by shooting (or tagging) targets. You do this with a hand-held laser tag gun.

Often these targets are placed on vests carried by your opponents that you need to aim for. Otherwise the laser tag guns themselves have sensors that are the targets.

Where to Play Laser Tag?

Nowadays there are lots of semi professional indoor laser tag arenas where you can have some serious fun with a bunch of friends. If you don’t have a big group, you can also just simply join in with another group of players.

These arenas can get a bit pricey sometimes but if you’re in a big group and you purchase several rounds of battles, it’s still very affordable. And fun guaranteed!

But you can also play laser tag at home with your kids or with friends. Simply buy your own home laser tag kit and you can play as often as you like, whenever you feel like it. Laser tag sets for home use are very popular and their quality is very decent too. Be warned though, home laser tag can get very addictive!

Laser tag as a game has been around since 1979 when the Phaser was released by Milton Bradley, the very first laser tag gun.

The Phaser was developed as a response to the huge popularity of Star Trek at the time and it didn’t take long before other companies jumped on the bandwagon and started to realize how big the laser tag market could become. Laser tag slowly turned into a team sport with many laser tag arenas popping up everywhere.

Are You Ready to Play Home Laser Tag?

Home laser tag guns and equipment sets aren’t bulky or unpractical, nor do they have to involve strapping on cumbersome and heavy vests. Now, in the comfort of your own home, or in the park in the sun, you can have an intense gaming experience without having to line up or play with strangers.

With so many customizable games and single player modes available, you can go out and play a game with friends or you can do a bit of practice shooting by yourself. This is also what we love most about laser tag: it’s not just an ordinary shooting game, it’s also a very social game and it keeps children active.

And that’s exactly why laser tag is so much better than video games. Children should be active rather than sitting in front of a TV or computer screen all day.

So get your laser tag guns out and experience how fun this game can be! 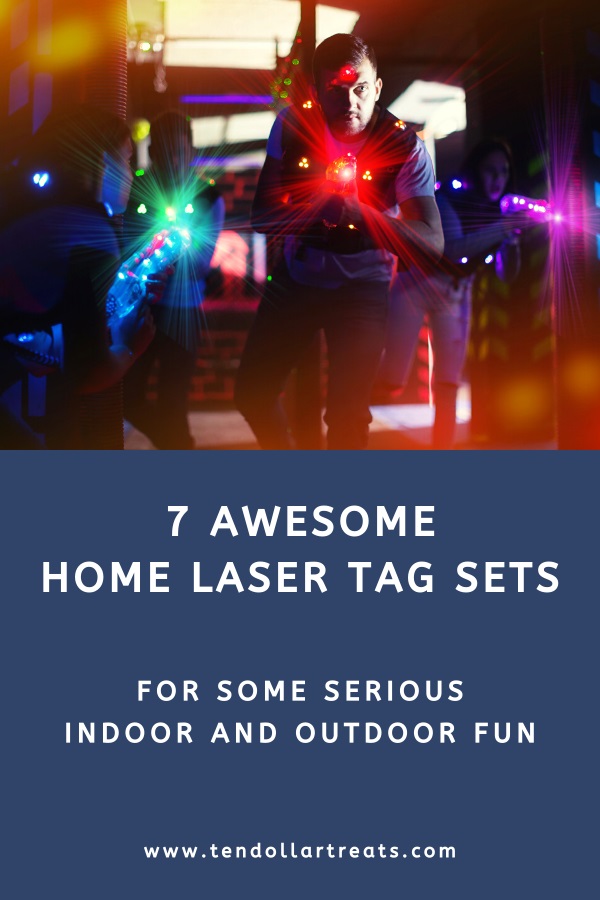 2 Comments
Leave a Comment Cancel reply
Welcome to Ten Dollar Treats, your online destination for fun and unique gifts. Please note that we may earn a small commission when you make a purchase through our website at no extra cost to you. Enjoy!
Latest