We have all played classic games such as Jenga, Connect Four, chess and checkers. But did you know there are also oversized versions of these games available that you can play outside?

And not just the classic games that we all know about. There are lots of other outdoor games that are so much more entertaining than watching TV or playing video games.

What’s great about these outdoor games is that they are not just fun to play, they are also very social and sometimes even educational. Some of these games actually require skill to be able to play them well.

So let’s get started! Here are 12 large, oversized and giant yard games for some serious outdoor entertainment.

Jenga was invented in the 1970s by Leslie Scott, a British board game designer and author. Named after a Swahili word meaning “to build”, Jenga was first sold as a commercial game in the early 1980s and quickly became a household name.

How does this fun game work? Players need to each remove one block at a time from a tower that consists of 54 identical blocks. Each removed block then needs to be balanced on top of the tower which makes the tower progressively taller but also less stable. The main rule is simple: the tower must not collapse! Jenga is a game that requires physical, mental as well as strategic skill. You need to have nerves of steel to safely remove a block and make it more difficult for the next player to remove one.

This oversized Jenga version comes with 54 hardwood blocks that are more than 8 times the size of the original Jenga blocks!

Also read:
>> My list of the best giant Jenga sets for outdoor use

What’s cool about playing a game of giant outdoor chess is that you can actually play in teams and you can also get spectators involved. Because the board is so big, you’ll have a much better overview of the game and others can join in and help with the strategy. So instead of playing one-against-one on a normal-sized board, with this giant chess set the game becomes a lot more social.

This heavy-duty nylon chess mat measure 9 by 9 feet when fully opened and has 13-inch squares. Each piece has a base diameter of just over 9 inches and the tallest piece, the king, is 25 inches high. Get some friends or family together and play a game in the backyard or in the park!

Some of us may have very fond memories playing beer pong and we know how much fun this party drinking game can be. The good news is that there’s also a supersized version of beer pong! But do not worry, there is not much beer involved with this giant beer pong set.

The BucketBall game set – as it’s officially called – is a fun game for all ages and comes with 12 buckets (6 blue and 6 red), 2 game balls, a tote bag and instructions. The whole set is very compact, portable and lightweight, perfect for holidays or for that lazy Sunday afternoon.

Also read:
>> My list of the best party drinking games

Checkers is one of the oldest and most popular board games in this list and has a very rich history. Various games similar to checkers have been around for thousands of years, and even today many different versions of checkers exist. The most common version in the USA is American Checkers – aka “Straight Checkers”, or “English Draughts” – which is played on an 8×8 board with 12 pieces per side.

Of course, an oversized version of the old checkers game should be included in our list of giant yard games. This particular set comes with a 120-inches wide plastic mat (8×8 version) and 3.5-inches high checkers. Lots of fun for both adults and children.

Some of the most popular and famous games, such as Yathzee, Mexico and Bunco, can be played with just dice. So wouldn’t it be awesome if we could play these games with giant yard dice?

The history of the cornhole lawn game (aka “dummy boards”, or “bean bag toss”) still remains a bit of a mystery. But some say this now hugely popular backyard game originated from throwing finished corn cobs into a bin.

Cornhole became a very popular pastime at backyard parties, tailgate events and campgrounds in Cincinnati in the late 1990’s, before spreading out into the rest of the USA and overseas. There’s even an American Cornhole Association with the aim to promote the game further and to establish standardized rules.

The concept of the cornhole game is simple: throw a little bean bag (or a bag with corn) at a raised platform that has a hole in it. If you manage to throw the bag into the hole, you get 3 points; if you throw the bag on the platform, you get 1 point. The game is finished once a player has earned 21 points. Simple, but very addictive!

Also read:
>> My list of the best cornhole boards for outdoor use

This oversized, bright-colored beach ball measures a whopping 10 feet in diameter when fully inflated and can provide lots of fun at the beach, in the park or in the backyard.

One tip though: don’t try to inflate by mouth, instead use an air mattress pump!

Standing 29 inches tall, trying to knock over these huge pins with an even more impressive bowling ball is guaranteed fun for young kids.

Ever seen a pair of sneakers hanging on power lines? Ladder toss (aka “ladder golf”) is a popular lawn game based on that very same concept: players need to throw bolas – two balls connected by a string – onto a ladder with three rungs/steps. The bottom step is worth 1 point, the middle step is worth 2 points and the top step is worth 3 points.

This set includes 2 Premium PVC ladders and the bolas are made with real golf balls. Feeling creative? Check out this guide to create your very own ladder toss game set.

What’s great about dominoes is the combination of simplicity and diversity. Dominoes are basically building blocks with which you can play numerous different games, from very basic to frustratingly complex.

It is believed that the first dominoes-like games were played in China in the 12th century. First introduced to Europe in the 17th century, Dominoes is now one of the most played board games in the western world.

Made with wood from sustainable sources, this giant dominoes set comes with 7-inches-high black wooden dominoes and a stylish nylon carrying bag with zip and handles. Take this ancient old game outside for some great fun in the sun.

It’s not entirely clear when the first ever Connect Four game (aka “Four-in-a-row”, “Four-in-a-line” or “Captain’s Mistress”) was invented or played, but it was first commercially sold as a game in 1974 by Milton Bradley (now owned by Hasbro). Connect Four is one of the best games ever invented, and with this oversized board measuring 48 inches wide and 46 inches high, you can now also play it outside.

The classic Twister game was invented in the 1960’s, and despite some initial controversy, it quickly became a very popular pastime. A game of physical skill, Twister is played on a large plastic mat with 6 rows of 4 circles in the colors red, blue, yellow and green. A spinner is used to determine where a player needs to put their foot or hand.

As the game progresses, players end up in unlikely, precarious or uncomfortable positions and as soon as they lose their balance and fall, they’re out of the game.

This giant inflatable Twister game measures 13 feet wide and long and 3.5 feet high. Powered by a constant-flow electric air blower, it inflates in less than a minute and is very easy to set up and take down. 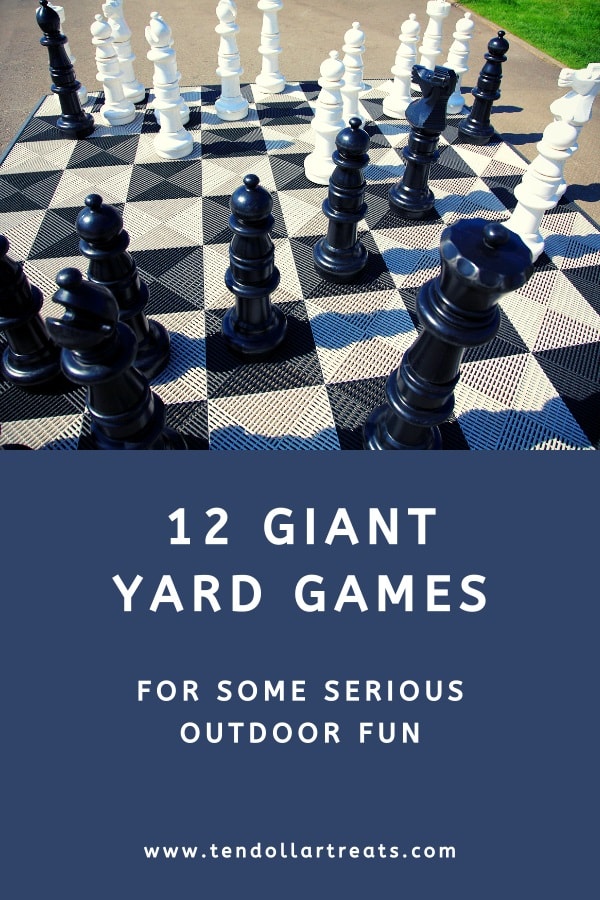 Leave a Comment Cancel reply
Welcome to Ten Dollar Treats, your online destination for fun and unique gifts. Please note that we may earn a small commission when you make a purchase through our website at no extra cost to you. Enjoy!
Categories
Latest