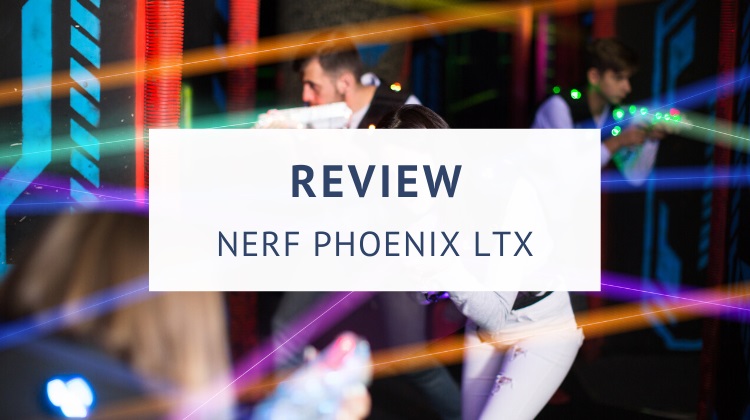 The Nerf Lazer Tag Phoenix LTX Tagger guns have been a popular laser tag set for more than a decade. Not only is this 2-pack very sophisticated and robust, the price for this set is also very reasonable.

What I like so much about laser tag in general is that, unlike video games, it’s a game that requires players to be active as well as social.

Laser tag as a game and the home laser tag market have grown in popularity enormously in the last years and a lot of different types of home laser tag guns and accessories like vests have entered the market to meet this high demand.

The Nerf Lazer Tag Phoenix LTX Taggers have really set a high standard and are still standing strong as popular laser tag guns. In this review, I will be sharing my thoughts on this laser tag model.

Check out my list of the best home laser tag guns and sets for some great options.

Let’s have a closer look at why these home laser tag guns have been so popular for so long. What are some of the best features of the Phoenix LTX taggers?

The Phoenix LTX taggers are very well equipped with great features that actually add value, and are not just there for show.

The sound and light effects are very well orchestrated. Whenever you tag someone or you get tagged yourself, the guns make different noises, loud enough to understand what’s going on. The sound effects are not annoying at all, they are useful and add suspense to the game. The guns also vibrate when you get tagged.

We believe the blasters are the perfect size and weight. Not too small and not too light, just heavy and big enough so that they feel comfortable in the hand.

Before playing, you need to choose the indoor or outdoor setting. The indoor/outdoor switch is pretty cool, as it determines for example how far your firing range can be.

When you run out of ammunition, you will need to release the power core with the power core release button. Once released, simply put it back into your tagger and you’re good to go and continue the battle.

The ammo indicator tells you when you are low on or out of ammunition. This is great because each time you need to release the power core, you are vulnerable. So the ammo indicator forces you to aim carefully and to not just randomly shoot everyone and everywhere. This is an awesome feature and makes the game feel much more realistic.

Before you can start a laser tag battle, you will need to decide on a strength score that is the same for all players involved. You can choose a 10 or 25 strength setting, using the strength switch on the gun.

The strength setting indicates how many times a player can be tagged before they are eliminated. The strength switch cannot be changed while playing a laser tag game.

Typically, if you play with only 2 laser taggers, strength 10 works well unless you want to go on for longer. With bigger teams it’s best to choose the 25 strength setting as you will have more chance to get tagged.

During play, the strength gauge tells you how many lives you have left before you’re being eliminated. In other words, if you’re almost done, be very careful!

The shield activation button allows you to protect yourself from being tagged for a certain amount of time. The drawback is that you can’t tag other people either.

Shield activation is a great feature because there are moments when you are extremely vulnerable, for example when surrounded by enemies. However, shield activation time is limited per game so you need to think twice before hitting the button and only use it when you really need it!

Also, each time you use shield activation, it will be active for at least 2 seconds, and 10 seconds at most.

With the Phoenix LTX tagger guns you can choose between team mode play or in solo mode play. Solo means that everyone plays for him or herself. In other words, there are no teams, just individuals battling it out to determine the winner.

Team mode play lets you play laser tag in 2 teams. You can’t accidentally tag your team mates and the team with the most hits wins.

Batteries:
Each Nerf Lazer Tag Phoenix LTX tagger requires 6 AA batteries, so 12 in total for both guns. You will need a screwdriver to actually install the batteries. The batteries are not included and will need to be purchased separately but they will generally last quite long in these guns.

Hopefully this article has got you excited about the awesome world of laser tag and about the Phoenix LTX in particular.

Even though this laser tag model has been around for quite a few years, they’re still very popular. Despite the fact that the newer Nerf Laser Ops Pro is the successor to the Phoenix LTX, the latter can still be purchased on Amazon.

If you don’t like the Phoenix LTX as much, or if you prefer a more modern laser tag model, have a look at my other recommended laser tag guns and sets (see the link above).

Leave a Comment Cancel reply
Welcome to Ten Dollar Treats, your online destination for fun and unique gifts. Please note that we may earn a small commission when you make a purchase through our website at no extra cost to you. Enjoy!
Latest